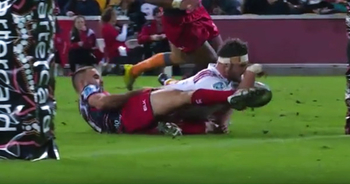 The Chiefs gave the Reds an almighty 50-5 hiding in Brisbane on Friday, somewhat aided by the hosts going down to 13 men after two yellow cards in the first half. Lachlan Boshier came close to scoring a stunning Chiefs try, but had the ball kicked out of his hands by Nick Frisby.

While at first glance it seemed as though he had dropped the ball, replays showed that Frisby’s foot came into play, causing referee Nick Briant to rule that a try would have been scored if not for the foul play of Frisby’s intervention.

A penalty try was awarded, and to make matters worse, Frisby was off for ten minutes too.

While it is fairly rare that this happens, and/or gets punished, the law is quite clear.

Law 22
(e) Tackled near the goal-line. If a player is tackled near to the opponents’ goal line so that this player may immediately reach out and ground the ball on or over the goal-line, a try is scored.
(f) In this situation, defending players who are on their feet may legally prevent the try by pulling the ball from the tackled player’s hands or arms, but must not kick the ball.

In the second incident, seeing the Reds go down to 13 men, young Jack Tuttle mistimed things completely to find himself underneath Tawera Kerr Barlow, who got up under the high ball.

It was yet another variation of the now frequent dangerous high ball challenges, as the catcher got taken out but luckily in this case, landed safely and without injury.