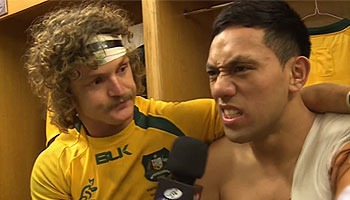 Wallaby winger Nick Cummins was on fine form with the mic again as he interviewed his team mates following victory over Wales in Cardiff on Saturday. Will Genia mentions his dropped ball in front of an open tryline, and Christian Lealiifano talks goal kicking.

Cummins wasn’t able to grab any ‘meat’, but played his role in what was a great performance away from home for a team that has had it’s ups and downs in 2013.

They ended the tour with four wins from five matches, after having lost to England first up, but then beaten Ireland, Scotland, Italy and Wales.

The Wallabies end the year firmly in third place on the official IRB World Rankings.