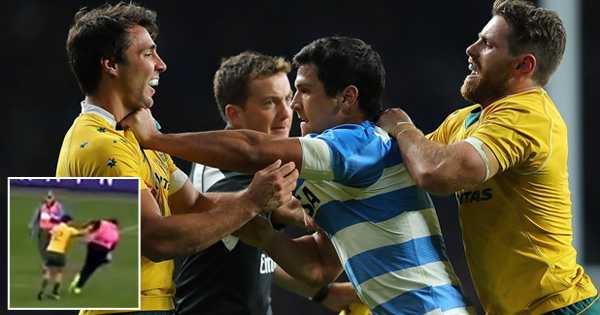 Wallabies replacement scrumhalf Nick Phipps has been issued with a warning after he pushed an Argentinian medic who was attempting to get the ball during their Rugby Championship match at Twickenham on Saturday. Phipps was penalised at the time.

In what was an entertaining but testy match, this was one of the more bizarre incidents as Phipps shoved the medic to the floor, sparking a bit of a scuffle as Matias Maroni came flying in to then push Phipps.

He has since been issued a Citing Commissioner Warning for contravening Law 10.4 (m) Acts contrary to good sportsmanship, a SANZAAR statement said.

There’s no doubt that the medical staff member should not have done what he did, and could be seen earlier in the match getting right in the middle when Argentina scored – perhaps frustrating the Wallabies – but the scrumhalf was way out of line and is perhaps lucky to not receive a ban.

“I really don’t know what was going through anyone’s minds to be honest,” said Wallabies coach Michael Cheika. “I know that no one was injured. Nick was probably trying to get the ball.

“I’m not quite sure about the penalty but it was a very rare situation and the ref dealt with it on the field as best he could. That’s it.”