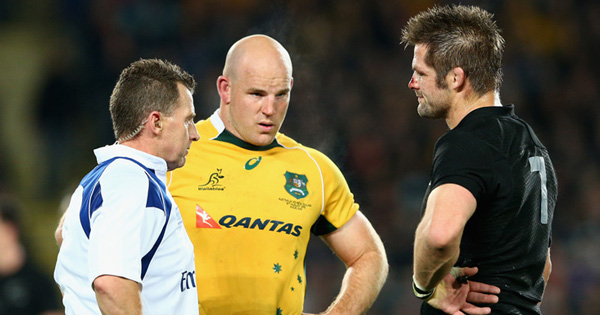 The 44-year-old will become the second Welshman to be bestowed the honour, following on from Derek Bevan, who refereed the 1991 final between Australia and England.

The only other northern hemisphere officials to do so were Ed Morrison of England back in 1995, and Irishman Alain Rolland in 2007.

“I would like to thank World Rugby and the Welsh Rugby Union for their support over many years. There have been so many individual people throughout my career who have helped and supported me along the way and while I can’t name everyone here, I will be thanking everyone personally in due course,” Owens said.

“I want to thank my friends and family for their ongoing support and for helping me through some rough times in my life. My dad, in particular, is always there for me and is delighted with this news – it’s just a shame my mother is not here to see this as she was a pillar of strength for me. She passed away six years ago and I know she would have been very proud.”

Truly humbled and honoured to be given the privilege of refereeing #RWC2015 final. Thanks for all your kind messages and tweets. Means a lot

Speaking before the tournament in a BBC special that will air tonight, Owens said: “The game has gone quicker, so your decision making has to be even better and quicker. The pressure on you as a referee is massive. You have less time to make your decision in that split-second. And in every stadium now there is a big screen, every decision you make is highlighted now.

“There are more cameras at the games now, there are more players viewing the game and watching it at home. When you look at that screen and then you make the wrong decision there is no excuses, people will not forgive you.”

While Jerome Garces and Wayne Barnes were given the honour of refereeing the semi finals, Owens has been the most consistent and well liked referee for the last few seasons. He will be joined on the touch lines in the final by Garces and Barnes, with Shaun Veldsman named as TMO.

Argentina will take on South Africa in the bronze final on Friday night (kick-off 20:00) and John Lacey of Ireland will take charge of that match. His assistant referees will be Glen Jackson and Chris Pollock, both from New Zealand. Graham Hughes of England will be the TMO.

Amongst a myriad of amusing highlights (see the Related Posts below this), he was at his comical best earlier in this RWC when telling off Scottish fullback Stuart Hogg for a theatrical dive against South Africa at St James Park, the home of Newcastle Football club.