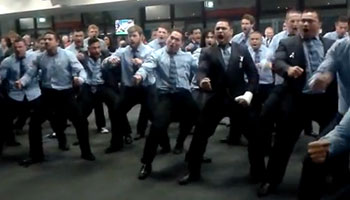 Rene Ranger played his final game for Northland at the weekend, captaining the side to a 20-19 victory over Bay of Plenty in Whangarei. Ranger leaves to join Montpellier in France later this month. His team followed up the win by giving him this memorable post match send off Haka.

Ranger turned down the opportunity to play for the All Blacks due to his overseas contract, but was proud to represent the Taniwha in the ITM Cup.

“I’m pretty happy, the boys dug deep at the end there and we got the win,” said Ranger afterwards.

“I’m a proud Northlander, to turn that [black] jersey down was one of the toughest calls I’ve made, but I love playing for this province. I’d like to come back and finish my career off for Northland.

“So it’s not quite goodbye, more like ‘see ya later’,” he added.

NOTE: the audio on the video is very loud. Thanks to the Toll Stadium facebook page for the clip.