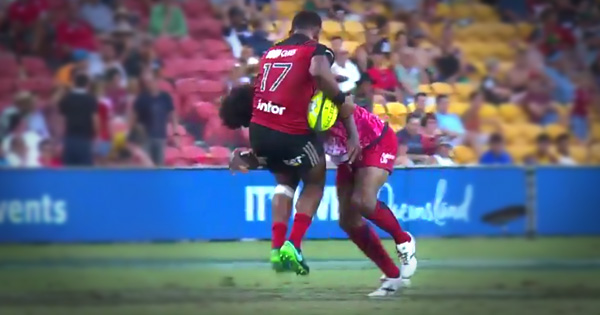 While there have long been jokes about Radike Samo not really knowing his real age, he is now all of 40-years-old and showed in Brisbane that he is still more than capable around the park. He played in the Brisbane Global 10s, and made this huge impact on a fellow Fijian.

Samo, a star in Super Rugby with the Brumbies and Reds, came out of retirement to play for his former side after having stopped professional rugby just two years ago.

“It’s been a while since I pulled on the Reds jersey, it’s going to be awesome to get back in front of the home crowd,” Samo said before the tournament.

Judging by this huge, well timed hit on recent All Black Seta Tamanivalu, he hasn’t lost any of the instincts that led to him earning 23 Test caps for the Wallabies.

Of course Tamanivalu was sold and always on a hiding to nothing in that position, but Samo’s long run up and timing made it a cracking hit to watch nonetheless.