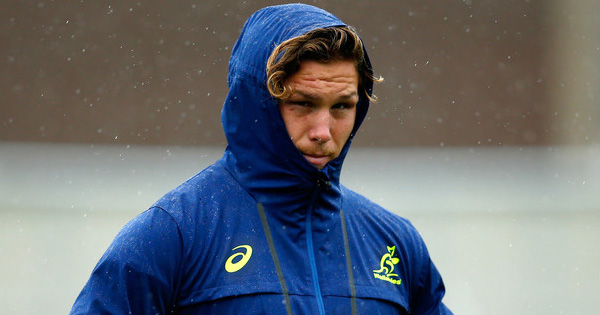 Michael Hooper will miss the Wallabies’ clash with Wales after he was this morning banned for a week for the incident that occured during England’s loss to Australia at Twickenham.

The dynamic flanker pleaded guilty to the charge of Foul Play contrary to Law 10.4(h) (dangerous charging). Watch the full video here, or the loop below (no audio)

Following a review of video footage, Hooper was cited by Independent Citing Commissioner Steve Hinds (New Zealand) under Law 10.4(h) for charging into a ruck or maul without the use of arms or grasping the player.

The hearing related to a consideration of sanction only given the admission of the act of foul play by the Player. Hooper was suspended by Independent Judicial Officer Alan Hudson (Canada) in accordance with the Rugby World Cup 2015 Disciplinary process.

With respect to the sanction, the Judicial Officer determined that the offence was low-end, which has an entry point of two weeks.

However, taking into account mitigating factors including his early admission, good conduct during the hearing and good character and the absence of any off-field aggravating factors, the Player was suspended for a period of one week.

In the context of the Rugby World Cup Tournament a week equates to one match.

While Wales fans are no doubt pleased with the ruling, the Wallabies will now be forced to bring in either Sean McMahon or Ben McCalman for the final pool match. The winner of that match will avoid the top placed team in Pool B (Scotland or South Africa).