Owen Farrell coughs up certain try with howler over the line 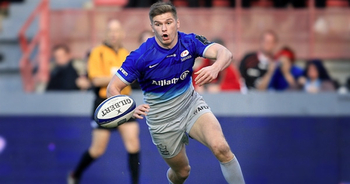 Saracens beat Toulouse 28-17 on Saturday but flyhalf Owen Farrell committed an absolute howler in the second half, denying his side of a chance to extend their lead further as they piled the pressure on the French giants.

The opportunity came from a neat pass by prop Mako Vunipola, who put Farrell in the gap superbly but then wouldn’t have been too pleased to see his assist spilt over the line.

The England number ten role has been a topic of conversation of late with both Farrell and George Ford included in the Six Nations squad, but the likes of Danny Cipriani not getting a chance.

This mishap wouldn’t have done his confidence any good, but he managed to shrug it off and kick two late penalties to secure the win and inflict a first home defeat on Toulouse this season.

“Owen’s had a great season for us so we’ll forgive him for one mistake,” said coach Mark McCall of the incident that came about when Farrell was comfortably over the tryline, under no pressure.

“But it was frustrating at times, we dominated the opening half an hour but didn’t really come away with too much for all that domination. We had a few opportunities in the second half that could have made them lose interest but we dropped a few balls over the line and close to the line.

“But to win in France, especially Toulouse is a very difficult thing to do and I am very proud of my players. We’re over the moon to go six from six in a pool like this.”

Farrell actually had the ball in two hands at first, but the switch to one was his downfall.