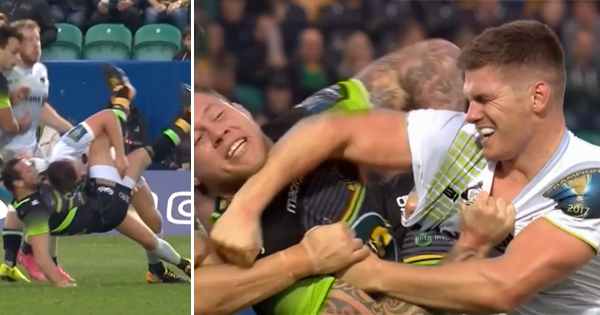 While Saracens’ 57-13 away victory over Northampton Saints in the opening round of the European Champions Cup got their campaign under way in emphatic fashion, this incident with Owen Farrell sparked a lot of discussion.

Number eight Teimana Harrison took exception to a solid Farrell dump tackle on Ben Foden, causing a bit of scuffle that included Farrell striking (pushing?) Harrison in the face with his elbow.

The tackle itself was a throwback to years gone by, before the days of over-analysing the position of the legs to see if a card – and usually a suspension – should follow.

Foden’s legs did indeed go slightly past the horizontal, but upon review, referee Pascal Gaüzère ruled that the tackle was okay. He did end up penalising Farrell for the use of the elbow though.

“I was just trying to get him off me,” said the England back, who clearly brought a smile to coach Eddie Jones’ face as he watched on from the stands.

Sarcens director of rugby Mark McCall was a bit concerned about how Farrell handled things.

“I thought the tackle was fine. His reaction when himself and Teimana Harrison were at each other worried me a little bit,” McCall said.

Farrell was booed by the Saints’ faithful, but it mattered little as he helped his side to a eight-try victory, as Saracens go in search of their third successive European Cup title.