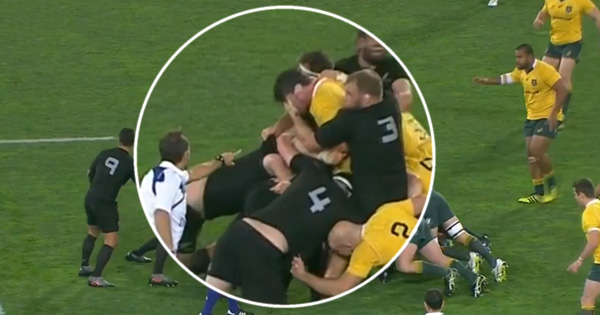 The entire rugby world seems to be united in shock that Owen Franks escaped punishment for what looks to be clear contact with the eyes during the second Bledisloe Cup Test on Saturday. There has been no citing, despite another angle looking very incriminating.

Only one angle was shown during the match (the live angle, as seen above) but since then another has been made public by an Australian newspaper, showing what looks to be Franks’ fingers making contact with the face and eye area of the Wallaby lock.

It came at a lineout early in the game, with the All Blacks scoring their first try shortly afterwards on their way to a 29-9 victory in Wellington.

The incident sparked outrage on social media and even led Ireland great Brian O’Driscoll, who was famously dumped on his head and shoulder against the All Blacks in 2005, to tweet World Rugby asking what is going on.

This is an absolute sham @WorldRugby ???! Makes a mockery of citing. If nothing comes of this it’s a farce. https://t.co/sDr92ggzcU

While it’s another example of a player not clearly sticking his fingers in the actual eyes of the opposition, it certainly appears to match the stipulated criteria that we have seen countless players punished for in recent years, ie: a player cannother make “contact with the eyes or eye area”.

Wallaby coach Michael Cheika was confident it would be picked up by the citing commissioners, saying: “They couldn’t miss it, it was pretty in the open. It’d be pretty hard for the match review to miss.”

However nothing has come of it, and New Zealand coach Steve Hansen hasn’t made the relationship between the two bitter rivals any better, by stating: “I’ve seen the footage and I agree with the independent person who said there’s nothing to answer for.

“There’s a process and that process has been followed, and whoever was running it, he’s obviously seen all the angles and believes there is nothing to answer for.”

Hansen claimed that there were other similar incidents throughout the match.

“In the same game, you can go to two or three other lineouts where they’re driving and the same thing happens. It’s an unfortunate by-product I think of the mauling rules that we have because the only way you can get there is through clamouring over the top, and then that creates a response, people try and pull them out of the way and the only thing they can use is the head area.