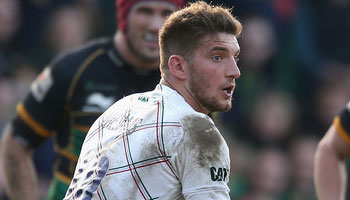 Wales will be without the services of Leicester Tigers flyhalf Owen Williams after he was last night banned for six weeks for making contact with the eyes of Northampton Saints back Luther Burrell in the Aviva Premiership semi final.

The charge against Williams for acts contrary to good sportsmanship, contrary to Law 10.4.M, was heard yesterday evening. Williams pleaded guilty after having made contact with the eye(s) or eye area of Burrell in the 64th minute.

Williams was given a six-week ban that leads up until the 1st September 2014. He is free to play again on 2nd of September. He will miss the three upcoming matches for Wales as well as three pre-season games for Leicester Tigers.

The 22-year-old flyhalf was on track to earn his first ever Wales cap after an impressive season with the Tigers, but that moment will have to wait until later in the year, if all goes to plan.

Wales are set to meet the Springboks in two Tests in South Africa, on June 14 and June 21.

The incident wasn’t clearly visible when watching live, and no replays were shown at the time. You can however see Williams leaning and making contact with Burrell, which is obviously where the offence occurred, especially judging by the England center’s reaction.

This is a short clip, but other angles would have been available for the disciplinary hearing.