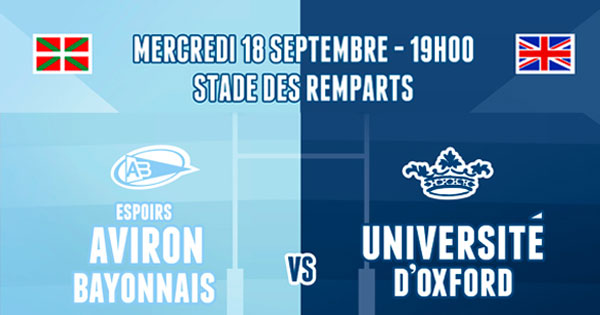 Oxford University Rugby Football Club (OURFC) are touring France currently, and last week took on a Biarritz side comprised of ‘B’ team players under 23 up and comers. Tonight they face Bayonne u23 at 7pm at Stade des Remparts.

Each year OURFC put together a pre-season tour in September with 30-40 players, coming together to not only bond and get to know one another, but also so that coaches can get a close look at which players to draft into the Blues team ahead of the Varsity Match in December.

In the last two seasons they toured Russia, but this year it’s a two week trip to the South-West of France, specifically the French Basque country. In the first week they’ll stay in a small village in the heart of the Basque mountains, where they will train on the local club’s pitch, go rafting, hiking, and even do some co-training sessions with local club’s first team.

Captain John Carter, who has featured on Rugbydump before, said: “The experience of visiting France in September for both rugby and cultural reasons, will play an enormous part in myself and the coaching team bringing the squad together and will be vital in building the team ethos and spirit required for a successful Varsity Match team.”

In their opening fixture they lost 24 -21 to the Biarritz Espoirs, conceding four tries to the three they scored. It was a good performance and topped off with a great post match reception, where the president of Biarritz exchanged a shirt with captain Carter and promised a re-match soon.

Oxford are aiming to make ammends against Bayonne Espoirs tonight, with kickoff at Stade des Remparts at 7pm. More on the match is availble on their Facebook event page.

The tour is sponsored in part by Rugby Centric, a great resource with plenty of information on all things rugby for aspiring young players, including training, nutrition and rugby skills