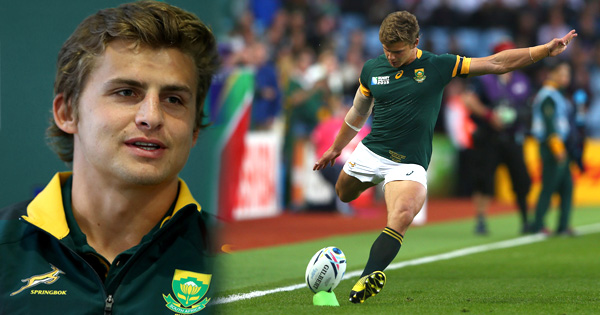 Patrick Lambie has been chosen to captain the Boks in the Autumn tests, Springbok coach Allister Coetzee confirmed. The Boks will play the Barbarians first at Wembley Stadium, London, on November 5th. Tickets are available here.

They will also play England, Italy and Wales in the following weeks.

Adriaan Strauss, who led the Springboks in all of their nine Tests so far this year, will be rested for the Barbarians match. Coetzee will name the Springbok match 23 on Thursday afternoon.

After sustaining a serious concussion against Ireland in June, Lambie was out of action for far longer than planned. He came back slowly via the Currie Cup, then made appearances for the Springboks in the last two matches of the Rugby Championship against Australia and New Zealand.

The 26-year-old can play flyhalf and fullback, and adds great value according to Coetzee, “He has excelled as a leader at franchise level and has the respect of his peers. He understands the team culture and has a great understanding of the game and the way we want to play.

“He understands the bigger picture and he will be back to lead the team again against England at Twickenham next weekend.”

Lambie said it is an honour to captain his country: “To play for the Springboks is a big honour and the captaincy comes with a huge amount of responsibility. South Africa has a proud rugby tradition and the whole squad are excited to represent our country against the Barbarians.”

Lambie currently has played 53 tests, scoring 137 points for the Springboks.