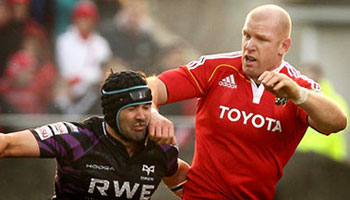 Munsters Paul OConnell saw red within a few minutes of returning to Heineken Cup rugby last night, after a lengthy injury layoff had resigned him to the side lines for six months. The return to action, and the 22-16 win over the Ospreys, was marred though by his swinging arm on Jonathan Thomas.

British & Irish Lions captain OConnell will face a disciplinary hearing sometime this week that will determine whether or not he receives further punishment after receiving the card for lashing out at Thomas, who was holding him from behind.

The experienced second rower had his back to Thomas and while he pleaded his innocence to referee Christophe Berdos, he unfortunately did catch the Ospreys forward quite badly in the face, causing him to slump to his knees. It didnt seem malicious, but was reckless, so youd think that will play probably play in OConnells favour when it comes to the hearing.

If things dont go well for him though, he could find himself missing the start of the Six Nations, which kicks off in just eight weeks time. Munster coach Tony McGahan said after the match theyll let the process take place and deal with the outcome then.

“We only had a brief look at it. We really havent looked at in depth enough to give any real comment. I suppose we saw what everyone else saw, a holding onto the jersey, a reaction towards that.

“Well have to let the process take its course and well abide by whatever decision is given.”

Ospreys forwards coach Jonathan Humphreys said that OConnell is not a dirty player, but he will likely miss a large chunk of the season.

“A similar thing happened to Gavin Henson for a similar incident and unfortunately he got 10 weeks for that,” added Humphreys, hinting that O’Connell will be out for some time.

What’s your opinion on the red card, and do you think he’ll get a hefty suspension?