Perhaps the rarest and earliest video of Stuart Hogg in action, aged 16 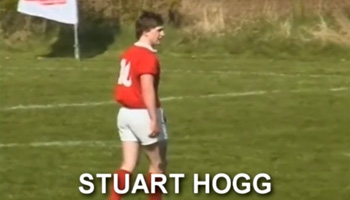 Known for his searing pace and electric feet – and occasional lack of temperament, Stuart Hogg has become one of Scotland’s most exciting and unpredictable assets. As this archive video from BordersRugby.net shows, Hogg has developed his attacking flair from a very young age.

First picked for Scotland in 2012 at the tender age of 19, Hogg has leapt onto the club and Test scene and was selected for the British and Irish Lions tour to Australia a year later.

More recently, Hogg was part of the victorious Glasgow Warriors side that beat Munster to claim their first ever Guinness PRO12 title. Amongst other highlights, his immense acceleration set up a great try for Henry Pyrgos on the day.

Back in 2009, a fresh faced 16 year-old Hogg certainly gave onlookers a a taste of things to come with an excellent running display at that year’s Berwick 7s, while playing for Hawick YM.

Thanks to Stuart from StuMedia