Peter De Villiers speaks out on Schalk Burger, rugby, and of course, ballet 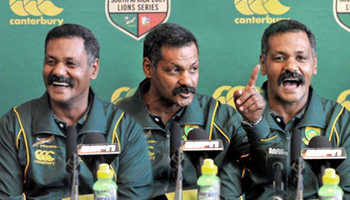 Controversial Springbok coach Peter De Villiers has yet again come out with some puzzling views on the recent second Test in the British & Irish Lions series.

De Villiers, who often baffles journalists with his strange analogies and generally confusing approach to the media, came out saying that he didn’t think the Schalk Burger eye-gouge incident was worthy of a sending off at all.

Yesterday in at a press conference in Johannesburg, De Villiers once again faced the media, and once again defended Burger, adament that his actions werent deliberate. He also went on to suggest that if you can’t appreciate rugby as a contact sport, you should take up ballet.

“I’m telling you, I watched the TV footage and I’m not saying anything otherwise I will go against everything we decided as a team. I watched the TV footage and I am still convinced there was nothing that he did on purpose. For Schalk himself when he watched it, he was like: ‘Oh my!’. But he never meant to go to anybody’s eye,” De Villiers stressed.

When asked if he thinks the Burger incident overshadowed a historic win, De Villiers lit up.

“You know what, 29 years we’ve waited for this grrrreat occasion. 29 years! And we are going into the third Test with the series sealed. We are the winners of the British and Irish Lions series, and we are happy about it. This country can now rejoice and be positive for the next twelve years. So I would love the Lions supporters to honour the fact that we won this thing.

“It was tough and the hardest Test series I have seen in a long time. We came back from a a poor start and I never thought we would be able to do that, because this is a brilliant Lions team that we are up against,” he said.

Late on Monday he cleared up what he had said about the incident, apologising for the misconception and explaining that he made his comments based on what he knows of Burger the player, not on what occurred.

“It was never my intention to suggest that I condone foul play. That is the last thing I would ever do and I apologise for that impression,” he said.

SARU president Oregan Hoskins made an official apology: “We would like to apologise to the rugby community for the erroneous impression that acts of foul play are in any way condoned by South African rugby.”

Is PDV barking mad, or just misunderstood and really bad at working with the media?

'Tactically, maybe we should have got the ball into his hands a bit more'

Sale director of rugby Alex Sanderson was frustrated at the Sharks’ failure to capitalise on a vintage performance by Manu Tuilagi in a 31-31 Gallagher Premiership draw with London Irish.

Sale surrendered a comfortable lead inspired by Manu Tuilagi as London Irish fought back to force a 31-31 draw in a pulsating Gallagher Premiership collision.