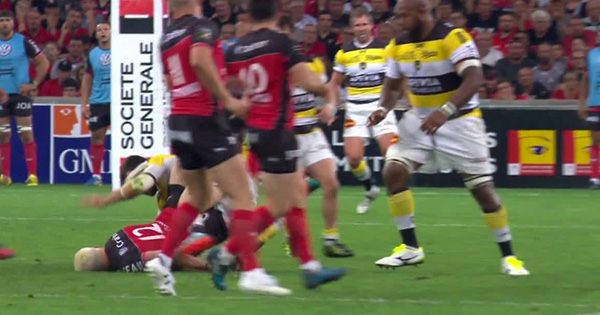 During the Top 14 semi-final clash between Toulon and La Rochelle, former Wallaby utility back James O’Connor was the recipient of this dangerous tip tackle at the hands of opposing centre Pierre Aguillon. Since O’Connor was deemed to have landed on the neck and shoulder area, it meant the end of Aguillon’s night, and season.

In what was a tight and exciting contest, Brock James and Leigh Halfpenny went back and forth with the boot until about 10 minutes into the second half when Aguillon was given the red card for his challenge on O’Connor. At the time, La Rochelle was nursing a 15-6 lead.

Aguillon couldn’t dispute the call too much as it looked pretty nasty both in real time and slowed down. Surely, this was the only outcome as O’Connor was driven into the ground at such a dangerous angle. The result could’ve been much worse.

O’Connor could be seen confirming he was ok to the referee, but was replaced shortly thereafter by fellow Wallaby Matt Giteau. He said after the match: “Very tough game & personally im feeling for Pierre, thought his tackle on me was solid and a good hit, was just unlucky I left the ground.”

Toulon was able to capitalize on the red card as Halfpenny slotted three more chances before Anthony Belleau finished the match in the most emphatic and dramatic way by nailing a drop-goal just after full-time for the 18-15 win.

Aguillon has since been summoned to face a disciplinary hearing with the French governing body (LNR) on 7 June, where he will be joined by Flip van Der Merwe, who was red carded in the other semi final.

Toulon will face Clermont in the final this Saturday at the Stade Vélodrome in Marseille.