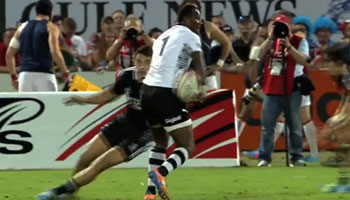 A busy week last week meant we weren’t able to get this featured but it’s well worth adding to our Great Tries archive as it’s not only a brilliant piece of play, but was part of Fiji’s highly impressive Dubai Sevens victory.

In the semi final they beat New Zealand 44-0 believe it or not, and went on to win the final against South Africa. This try was named Try of the Tournament by the IRB, narrowly beating Phil Mack of Canada’s effort. You can view that, and the other outstanding contenders, on page two.

The try was scored by Emosi Mulevoro but it was Pio Tuwai’s moment of magic that made it.

Seven of the Best Tries from the 2013 Dubai Sevens