Player banned after filthy off the ball tackle on female referee 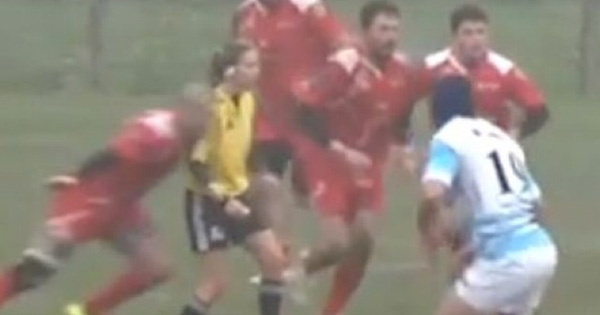 Without a doubt, one of the uglier incidents we’ve seen on a rugby field occurred recently in an Italian Serie A match between Valsugana Padova and Rugby Vicenza. A Vicenza player has been banned for 36 months for this dangerous, blind-side tackle on a female referee.

Bruno Andres Doglioli – who captains Vicenza – can be seen inexplicably charging into the back of match-day referee Maria Beatrice Benvenuti. The shot gave Benvenuti whiplash, but in true rugby form, she soldiered on to finish the match.

Unbelievably, Doglioli was given a mere yellow card, but was later suspended by the club.

Thankfully, the Italian Rugby Federation stepped in to assess what, according to them, amounts to the harshest penalty handed out in the last 20 years:

“The Italian Rugby Federation would like to reiterate that this sanction – the heaviest in the last 20 years – underlines that when it comes to infringing the rules of the game and, above all, the fundamental values of our sport, we will show zero tolerance.

“It also underlines the FIR’s firm stance against those who abuse, verbally or physically, match officials.”

Amidst a host of other recent cheap and dirty plays, this incident also seems to be getting the kind of negative attention it deserves. This level of illegal behavior is simply inexusable and frankly, he’s fortunate the ban was not longer.