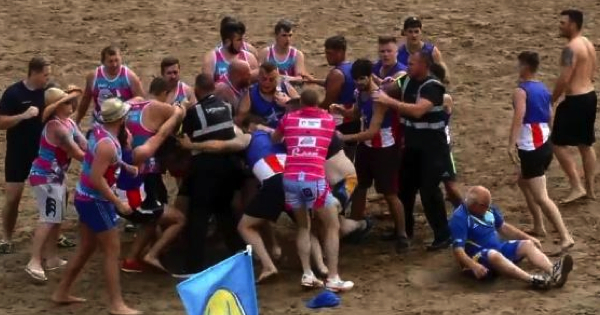 The Beach Rugby Wales touch rugby tournament in Swansea returned for its 11th instalment on the weekend, and was as fun and competitive as ever. Tempers boiled over though, as this year’s tournament was marred by two brawls, with the police called to alleviate the situation.

The tournament plays a pivotal part in the beginning of the season for many clubs in the area, and is intended as a fun day out in the sun coupled with some flair and fiercely contested touch.

The fights broke out during the matches between Porth and Wattstown, and Ferndale and Rhigos. The four teams in question were excluded from the tournament as a result of the incidents.

As is often the case in rugby, the players involved in the fights were quick to bury the hatchet.

“After the problems on the pitch,” said tournament founder Ashleigh Walters, “the teams were all friends again because what happens on the sand, stays on the sand.”

The video was the cause of much comment on social media. Neil Back – no stranger to scraps himself over the years – was quick to point out the friendly aftermath of the scuffle.

Many were quick to play down the situation, with Walters also going on to say that the fights had been “blown out of proportion”.

Indeed, the fights didn’t even seem to register in some people’s summaries of the day.

Had fantastic feedback from my pals who went to @BeachRugbyWales yesterday.

The jury’s out. There were reports of drinking taking place before some of the matches, which might explain some of the players’ behaviour, but we’ll let you decide whether it’s a blight on our game, or just a bit of sand-bags.

The fight video is above but if you’d like to see more actual gameplay, you can watch below

Credit: This Is Swansea Wales UK