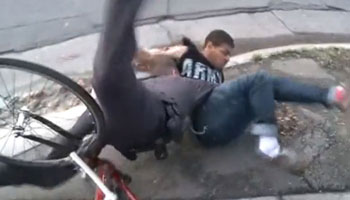 Earlier today we shared a link on our Facebook Page to this incredible tackle by a policeman in Sacramento. It proved to be popular so for those that missed what happened, here is an updated report on what went on before the big takedown.

The suspect, now named as 19 years old, attempted to flee from officers while they searched the area. His getaway vehicle of choice? A bicycle.

CBS news cameras were there to capture what happened next as the brave policeman dive-tackled the man onto the pavement with little regard for his own body. Backup arrived (including a neighbour in crocs), and they eventually subdued the man.

The police officer was reportedly treated for a wound to his face, while some of the other policemen and the helpful bystander had minor injuries. So if you ever wondered how to rugby tackle a man on a bicycle, there you go. It gives new meaning to the term tackling crime.