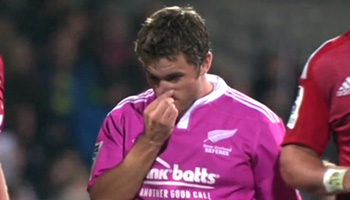 Referee Nick Briant found himself a little closer to the action than he would have liked when the Crusaders hosted the Chiefs in their Super Rugby derby. Chiefs scrumhalf Brad Weber fired the ball to switch play, so Briant could do nothing but take the full brunt of it in the face.

We’ve seen some bad ref knocks in time, some being tackled, and others getting hit in the head, but this one was square in the nose, with possible comparisons to when Wayne Barnes and Andrew Small both got hit in recent years.

Briant’s immediate reaction though, was priceless.

Through teary eyes, cool as you like Briant quipped “Falconned, right in the nose.”