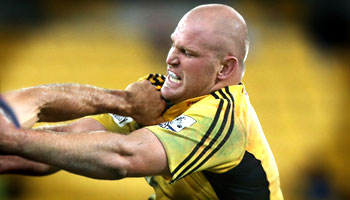 The Blues put on an impressive showing away from home as they beat the Hurricanes 28-6 in a fast paced Super Rugby derby in Wellington. While the win was comfortable in the end, the ‘Canes tried their damndest to keep out the lethal Blues outfit.

There were a number of big tackles throughout, with Julian Savea knocking back a few players and hitman Motu Matu’u flying at Blues players with mixed success.

It was prop Ben Franks who made two of the tackles of the match though, the first being a big hit, the second something that was actually quite unbelievable to see.

His hit on Jackson Willison early on was impressive, but later, after a frantic period of play that included multiple turnovers, Franks miraculously chased down speedster Frank Halai.

Halai has spent a good amount of time in the New Zealand Sevens team, being one of the highest rated players in the World Series. He actually scored the first try of the game, but on this occasion he met his match as powerlifter Franks’ determined chase prevented a try.

The Blues racked up four converted tries in total, giving them a bonus point win after a run of three losses, and helped them leapfrog the Hurricanes into second on the New Zealand conference.

We can only speculate as to whether Halai would have made it to the tryline or not. What we do know is that a huge All Blacks prop somehow caught one of the quickest wings in the country.