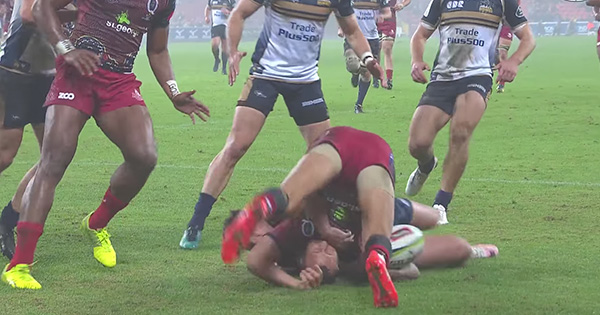 Mercurial talent Quade Cooper is one of the most gifted players on the planet, capable of just about anything, with a wide range of skills. He’s also mastered the ability of dividing fans’ opinions, as for every brilliant side-step or cross-kick in his arsenal, you may find a shocker or two like this.

In the Queensland Reds’ match against the Brumbies, Cooper had several forgettable moments, perhaps none more so than his gift-wrapping of a try for Kyle Godwin.

With the Brumbies on attack, fullback Tom Banks kicked ahead, finding space behind the Reds. Cooper did well to track the ball down but events unravelled from there. Due to his momentum, and a good covering tackle by Banks, he was unable to stop or off-load.

Instead, he spilled the ball in-goal to a waiting Godwin for an easy Brumbies try. In fairness, aside from spilling the ball, Cooper’s options seemed very limited.

Things did turn out extrememly positive for Cooper as he delivered some crucial late-game heroics and scored five points with the boot, including the match-winner at the death for a 16-15 win.

View the blooper below, and full highlights below that