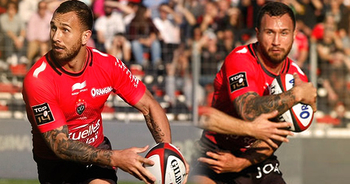 Quade Cooper had a quiet World Cup but took center stage again yesterday as he made his debut for powerhouse European outfit, Toulon. Cooper impressed with his usual tricks, which included setting up this lovely try with a neat no-look dab through.

Cooper guided his new team to an emphatic 58-8 win over Montpellier in his first Top 14 showing on Saturday. It wasn’t all plain sailing though, as he also threw a loose pass that resulted in an intercept try for Julien Malzieu.

It was Montpellier’s only try of the day, while former Reds flyer Lachie Turner scored a brace, with the second of his two coming from this very neatly executed grubber through by Cooper.

Winger Josua Tuisova picked up a hat-trick, as Cooper enjoyed some space to free up the backs while the likes of Matt Giteau, Drew Mitchell, Bryan Habana and Frederic Michalak watched on.

“I’m very excited to be here and to start off with a win like that you can only dream of,”  Cooper told AFP. “Personally I’ve been in some big games, but that was very special.”

“As a team we had ambitions and the goal to go out there and win with a bonus point. The way we went about that was to play a hard game at the start and then use the backs. I’m not saying it was a surprise but it was something we worked all week to achieve.”

Cooper touched on being disappointed to only play one game for the Wallabies at the World Cup, as the form of Bernard Foley kept him off the park.

“I was disappointed not to play more at the World Cup. I’d been training for 12 weeks to play games so I was keen to come here as soon as possible to play.

“It was very special to experience my first game for Toulon in an atmosphere that is unique.”

You can see the try here, and below that, a short compilation of Cooper’s highlights on debut and then a full highlights wrap from the match.