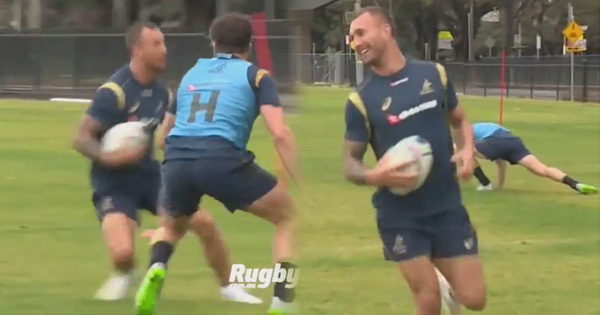 HOT STEPPER! Who wants to see @quadecooper strut his stuff at #Sydney7s?!? Not many tickets left! Get them here: ausrug.by/1SEPiZL

Wallaby star Quade Cooper (seen above with some trademark footwork) has joined the Australian Sevens program and will be available for selection for the 2016 Rio Olympics, where Rugby Sevens will make it’s return for the first time since 1924.

Copper will be released from his contract with Toulon in France so that he will be available to play in the Sydney, Paris and London legs of the 2015-2016 HSBC Sevens World Series.

The 27-year-old will then join up with the squad again in Sydney to prepare for the Olympics.

While Cooper didn’t play a huge role in the Rugby World Cup, he was part of the squad that finished runners up to New Zealand in the final, and has earned 58 Test caps for his country.

“I’m passionate about Australian Rugby and to be given this opportunity to represent my country in a different form of the game is one which excites me,” said the gifted flyhalf.

“I’m looking forward to working with the players that are already part of the squad and hopefully I can add something to the group. As a rugby player growing up you never think you’ll have the chance to play at an Olympics so I’ll be doing everything I can to make the squad.

“I would also like to thank Toulon and Mourad Boudjellal [Toulon president] for coming to an agreement with the ARU which will allow me to pursue this opportunity.”

Other Test players have already made the switch to Sevens for the Olympics, with Francois Hougaard successfully doing so for South Africa, and Sonny Bill Williams now in training with the New Zealand Sevens team.

The inaugural Sydney 7s takes place on the weekend of the 6-7 February.