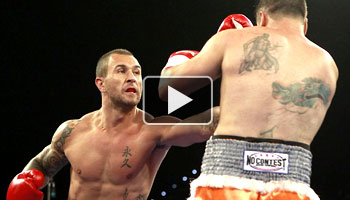 Reds flyhalf Quade Cooper won his first professional fight in Brisbane on Friday night with a first-round knockout of insurance salesman Barry Dunnett. The fight was part of the undercard for the Sonny Bill Williams/Francois Botha main event.

The cruiserweight fight was scheduled for four rounds but Cooper, clearly the fitter of the two athletes, came out looking strong and far quicker on his feet. The knockout came with just his second flurry of punches.

Cooper said afterwards that stepping into the ring and knocking down another man was ‘daunting’, but part of what needs to be done in the sport. He also said that he will continue to train and hopes to fight again in future.

The Reds play their first Super Rugby match against the Brumbies in Canberra on February 15th.

See more of Cooper in action, on the rugby field, in the related posts below.