Quicker Scrums and No More Diving: The New Law Changes We All Wanted To See 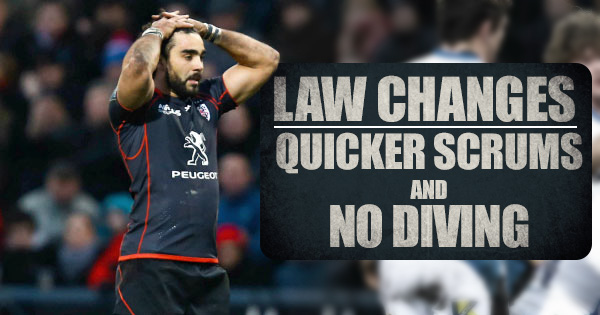 After World Rugby’s latest review of laws after the World Cup, a number of minor amendments that have been trialled and approved in the southern hemisphere will come into effect in the north. Amongst them, ‘simulation’ being specifically outlawed. Amen.

Cristiano Ronaldo is one step further away from achieving his dream of being selected for the Portugal national rugby team after it was declared this week that ‘diving’ has become outlawed.

It’s pleasing to hear that World Rugby are in touch with the world’s generally agreed philosophy that rugby is a ‘tough’ game; a reputation that fans hold proudly, and do not want to see it tarnished by the amateur dramatics that association football has become so renowned and criticised for.

It will be universally appreciated that this form of behaviour is essentially cheating.

At one end of the spectrum, we have the likes of Yoann Huget’s Oscar-worthy flop; looking as though he’d taken a right hook from Rocky after what can only be described as a brush on the chest from an opposition player (see video below, and also enjoy Ben Kay and Austin Healey’s entirely justified commentary).

And at the the other end, we have serious offences like 2009’s ‘Bloodgate’ scandal involving Harlequins’ Tom Williams using blood capsules to fake a blood injury and facilitate an extra substitution.

But no matter how trivial or serious the offence, the significance of this move by World Rugby is that it addresses a question of attitude; a question of values and beliefs surrounding the game – a rare sight in modern professional sport.

A word of warning however, this may lead to fewer videos like this gem in the future:

The rest of the amendments mainly comprise changes to the scrum that are conducive to faster restarts overall; hopefully cutting down the ubiquitous ref-cam shots up the noses of sweaty, red-faced front rows and stoppping back lines from freezing solid in December fixtures across the northern hemisphere.

All of the main amendments are listed below, along with a link to World Rugby’s official announcement. Note: Changes are mistakenly described as happening on both 1st June and 1st July in the announcement. World Rugby have officially clarified via Twitter that the changes are being implemented on 1st July.

World Rugby’s official announcement can be found here. And view more dives in the Related Posts