Racing and Montpellier through to Top 14 Semi Finals 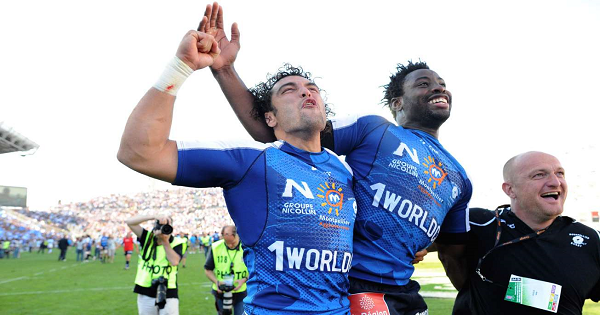 Racing 92 and Montpellier both advanced to the Top 14 semi-finals at the weekend as they came out on top in their respective playoffs (barrages). We’ve been focussed on the Test matches, but here is a recap of both knockout games in France.

Seven penalties from the metronomic boot of Dan Carter was enough for Racing 92 to edge out Toulouse 21-16 in Paris, while Jake White’s Montpellier scored three tries to none in their 28-9 victory over Castres.

Much has been said about the quality of both matches from both the French media and fans alike. And while it lacked in overall excitement, Racing did have to ride out a resurgent wave of Toulouse attack in the closing stages.

Ultimately, it was Toulouse’s indicipline that cost them the game. They scored the only try of the encounter, through centre Gaël Fickou – who has been called up to Guy Novès’ French squad for their upcoming tour of Argentina.

Montpellier were far more dominant in their comprehensive win over Castres at home.

Tries from Timoci Nagusa, Paul Willemse and Pierre Spies proved too much for a Castres outfit who scraped into the barrages the previous week.

Rory Kockott and Benjamin Urdapilleta’s penalties were all that the visitors could muster.

Racing 92 will now face last year’s beaten finalists Clermont Auvergne for a chance to play in their second final of the season, while Montpellier face Toulon. Both semis will be played at the Roazhon Park in Rennes.

You can catch highlights of both quarter final matches below: