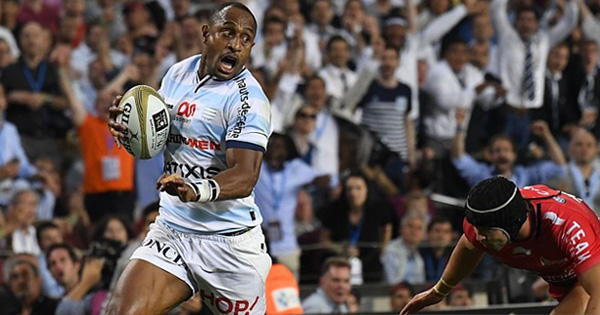 Joe Rokocoko scored a stunning try for the second week in succession as Racing 92 captured their first French league title since 1990 by beating Toulon 29-21 in front of a whopping 99,124 spectators at the Nou Camp in Barcelona.

What was more remarkable for the Parisien side was the fact that they managed to win despite seeing scrum-half Maxime Machenaud red carded early in the first half for a tip-tackle on Matt Giteau.

Toulon, unable to make the most of the man advantage, only led 14-9 at the break through three Leigh Halfpenny penalties and a try from Mamuka Gorgodze.

Racing stayed in touch through the boots of Dan Carter and Johan Goosen and led 21-14 before Joe Rokocoko went over for the decisive try with 20 minutes remaining.

A late Maxime Mermoz try was not enough for Toulon as a final minute penalty from Carter secured a historic title triumph for the Ciels et Blancs.

Machenaud’s red card was clearly a major talking point and had Racing gone on to lose the match, it may have been even more controversial than it was.

The tackle itself was particularly clumsy as Machenaud attempted to drive back Giteau after the Australian got back on his feet. Referee Mathieu Raynaud, having seen Giteau landing on his head and being tipped past the horrizontal, had no option but to send Machenaud off.

What do you make of the incident? Did Machenaud deserve to see red, or would a yellow have been more appropriate considering the magnitude of the occasion?

Watch the Rokocoko try, from a Dan Carter turnover, with English commentary below.