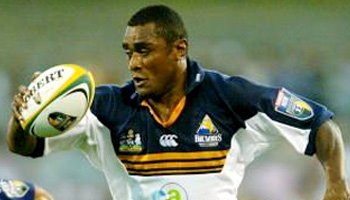 Back in 2004 it was very seldom that you didn’t hear Australian commentators yelling out ‘SAMMMMO’ whenever the Brumbies played. Radike Samo was indeed somewhat of a freak of nature.

The Fijian born Samo was a monster of a man who played second row for Australia and the Brumbies, but was also comfortable playing on the wing if need be.

The big man is seen here wrecking havoc on two of the strongest New Zealand outfits.

With his trade mark ball-in-one-hand long strides and the infinitely long reach to fend off any would-be tacklers, the Fijian Samo was a wonder to watch in his time with the Brumbies not too long ago.

He literally made runs like these every week, and it was a huge disapointment for many to see him leave the Brumbies at the peak of his game, shortly after Wallaby selection.

He has since achieved with Stade Francais, but possibly never reached the same heights as he did in Australia. Enjoy a moment or two of classic Brumbies running action, from a legend in his own time, Radike Samo.