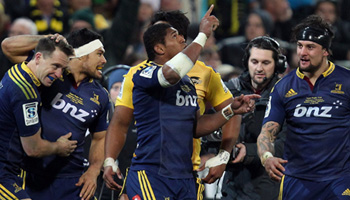 The Highlanders have arrived back in Dunedin and the celebrations will no doubt continue throughout the week, as they take in what was a historic and well deserved 21-14 Super Rugby final win over the Hurricanes on Saturday.

Co-captain Nasi Manu, who is heading to Edinburgh for next season, said “I still can’t really believe that we won it. It will be good just to enjoy it with our supporters and definitely do a couple of days (of partying).”

The team were greeted in the arrivals hall by a sea of blue and gold flags, as fans performed a celebratory Haka, relishing the rare championship victory, their first Super Rugby title ever.

Coach Jamie Joseph said that he was pleased to bring it home for the loyal fans.

“Rugby touches a lot of people in the deep south so it’s just great to give something back.”

“It’s probably the boys who are staying who are most disappointed we couldn’t give them what they deserved. You have the most capped forward of all time and the two most capped Hurricanes of all time in that mix,” said 23-year-old All Black, Perenara.

“The contribution they’ve given the club is immense and we wanted to send them off the right way. They deserved the win. We worked hard for each other every single day, we tried to better ourselves every single day and I saw these boys grind every day since November. We worked bloody hard.

“We came up against a good Highlanders team and they took the opportunities that presented themselves… you take more opportunities than the other team in a big game and you probably come out on top and that’s what happened tonight.”

As for that try, Elliot Dixon has since said that he was sure he got it down, despite his immediate reaction seeming otherwise. “It (the camera) just panned to me at a bad time.

“As soon as they said TMO I was like ‘oh no’, then everyone saw me shaking my head and thought I didn’t get it down. But yeah, I got it down.”

Highlights wrap from the brilliant game is below, and the trophy presentation on page two