Referee knocked out by disgraceful punch in rugby league game 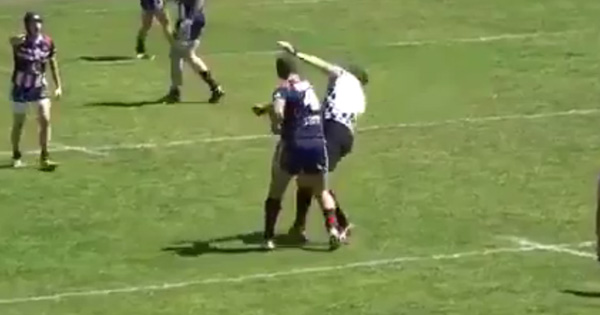 A referee has been knocked out by a vicious punch in a rugby league match in France. The disgusting incident took place in a French Cup juniors game between Saint-Esteve and Toulouse. The player in question lost his cool after being sent off by referee Benjamin Casty.

As you can see in the video below, he then lashed out at the man with the whistle, knocking him to the floor before turning on a Toulouse player, as a brawl broke out.

To the credit of the rest of the Saint-Esteve players, things didn’t escalate too much, which perhaps gives us an idea of their own views on what the culprit did.

The match was immediately abandoned as referee Casty had to be taken to hospital. He suffered injuries to his cheekbone and jaw, but luckily the jaw was not broken.

The president of the French Rugby League Federation strongly condemned the incident.

“I hope that the National Disciplinary Commission, which will meet on Wednesday, will be uncompromising,” said the president, Marc Palanques.

Meanwhile the president of the Saint-Esteve club, Christian Cozza, is set to resign as a result of the incident. “This player had already been suspended four games earlier in the season and I did not want him to play,” said Cozza.

A life ban is surely on the cards, while Saint-Esteve have also received a heavy penalty.