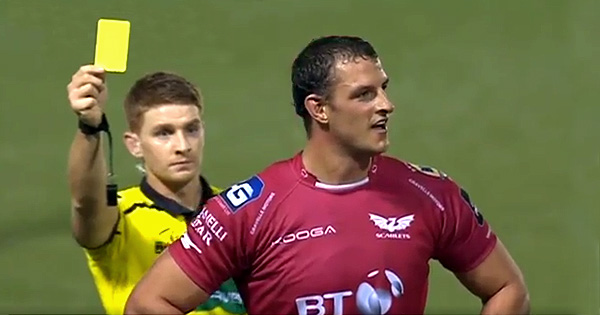 Young Scottish referee Lloyd Linton made a bit of a howler with this decision in the Cardiff Blues vs Scarlets Welsh derby in the PRO12, a match that featured brothers Aaron and Steven Shingler playing for opposing teams.

With ten minutes left in the match a kick through was blocked and effectively kicked ahead by Scarlets flanker Aaron. Both players chased back but as Aaron had the lead, younger brother Steven tackled him, but without the ball.

They were obviously in different jerseys, and had different numbers, but somehow the referee got the wrong brother, showing Aaron a yellow card. He almost refused to go off but Linton was having none of it, insisting that the Scarlets man get off the field.

“I don’t like to say that about referees but he has had an absolute shocker,” said BBC commentator and former Test flanker Martyn Williams, before Gareth Charles said “That was one of the most ridiculous decisions you’ll see.”

Scarlets coach Wayne Pivac said post match “Clearly he was tackled without the ball and the wrong player was sin-binned,”.

Despite it appearing that way to all involved, flyhalf Steven actually appeared to agree with the call, even holding up his hand in what appeared to be a carding gesture, probably claiming he was blocked.

Whether it was a case of mistake identity or simply a really bad call, it’s surely a moment Mr Linton will sooner forget. He’ll be grateful that the call didn’t really affect the outcome of the match, as Scarlets won 26-15.

“One of the most ridiculous decisions you’ll see” says @charlorugby 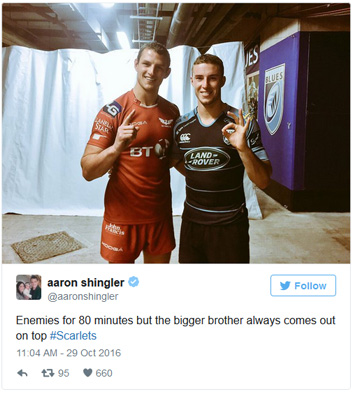 A news report on the incident: