Referee Nigel Owens chats to the TMO, on an iPhone 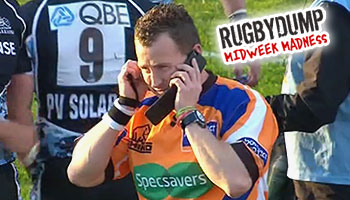 Welsh referee Nigel Owens is in the spotlight yet again and this time it’s not for being knocked over by a player, not for coming up with a catchphrase, and not for telling off thirty grown men. This time it’s for speaking on a mobile phone, during a match.

As mentioned in the past, Owen’s isn’t one to shy away from the cameras. He makes regular appearances on television (other than when reffing), is known to do a bit of stand up comedy when possible, and has large followings on Facebook and Twitter.

So when the communications system at Musgrave Park failed on the weekend and he couldn’t get through to the Television Match Official, Owen’s found another way.

“Just so you all know. I dont take my phone on the field with me, it was the No4 officials phone. The comms were not working to talk to the TMO,” he said after the game, before later tweeting, ironically, “Bloody technology and me never get on, ha.”

Ireland winger Tommy Bowe was watching the game, between Munster and Glasgow, and used the same platform to comment on it at the time. “Oh my god, can’t believe what I’m seeing. Nigel Owens on his phone ringing to ask video ref if it’s a try!!”

Many of you had requested to see the moment again, or for the first time if you missed it, so here it is below. It’s surely not a first, but can you recall similar incidents?