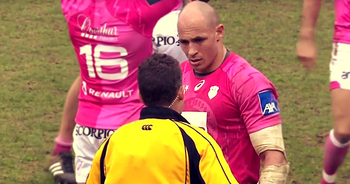 Leicester Tigers gave Stade Francais an almighty wallop in the Champions Cup quarter final this past weekend, winning 41-13 in front of their home crowd at Welford Road. Sergio Parisse was clearly a frustrated man, and referee Nigel Owens needed to put him in his place, twice.

While Parisse may be considered the king of Italian rugby, and is often inspirational for Stade Francais too, he has shown that he can be quite animated and outspoken on the rugby field.

Referee Owens was certainly not impressed with his behaviour, so gave him a real telling off.

Did it go in one ear and out the next? Probably, but it kept him quiet for the time being, and he did stay on the field until the end of the match, so Owens would consider that a job well done.

The win secured the Tigers a home semi final, where they will host Racing 92, who beat Toulon.

View the official highlights on page two (some regions only)