Like their talisman leader Jacques Burger, Namibia’s Renaldo Bothma was one of the players that stood out for the tiny African nation at the 2015 Rugby World Cup. His no-nonsense approach to the game and fearless attitude clearly has carried over to Japan, where he plays for Toyota Verblitz.

Here is a quick clip from the Japan Top League match against Toshiba Brave Lupus, where he made a barnstorming run then collided with brave flyhalf Yoshikazu Morita’s shoulder.

In fairness to the far smaller Morita, it ended up being a pretty solid hit, and it was quite lucky that neither player was injured. It was actually former All Black Richard Kahui that ankle-tapped Bothma, causing him to fall into Morita.

In case you forgot who he is, Bothma is the player who had the word SMASH written on his forearm guard when playing against the All Blacks at the World Cup (see below).

Kahui himself has made some crunching tackles over the years, so view them in the Related Posts 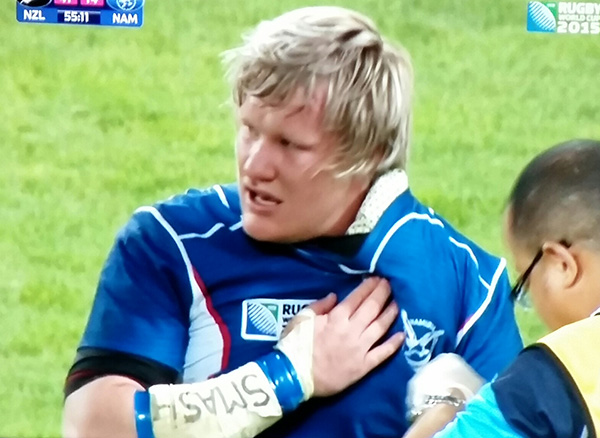