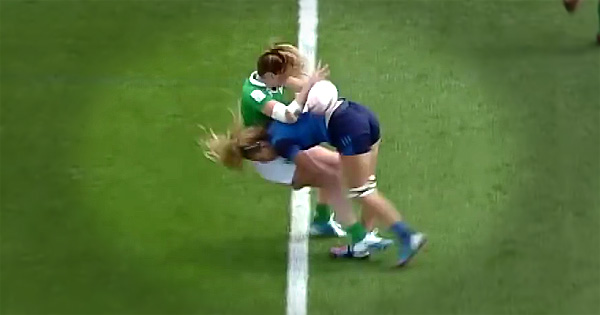 French Women’s sevens star Marjorie Mayans made this crunching tackle on Ireland’s Stacey Flood at the Atlanta Women’s 7s in the USA a few weeks back. The hit looked to have caused some real damage, leaving Flood wincing on the floor as the ball was turned over and a try was scored.

While the women’s game continues to rise in terms of reputation and coverage, Linda Itunu’s huge hit in 2013 was probably the biggest tackle we’ve seen in recent years.

In that same year Sharni Williams was dubbed the ‘Woman of Steel’ after she took a brutal double hit in a match against England, and in 2010 there was that famous Nicole Beck covering tackle that injured poor Fiona Pocock.

French star Mayans clearly has a bit of a reputation for being fearless on defence, as can be seen in this short compilation from a fifteens match against Wales two years ago. In the full form of the game, she’s a hard-hitting centre. Impressive!

The Hurricanes will open their pre-season by hosting the Blues and Chiefs in a game of three halves next month.