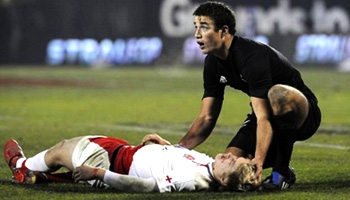 The second New Zealand vs England Test was, despite the final score, a physically demanding game that left it’s toll. One of the biggest clashes of the night, if not the biggest, was when star debutant Richard Kahui flew into Matthew Tait, head first.

Kahui flew into Tait with force, but simply went too high, and with Tait ducking slightly, the result was a header to Tait’s face that would have done a football striker proud.

Kahui attended to Tait immediately, as both players were left bleeding, with Tait coming off significantly worse, with blood seemingly coming from under his eye, his nose, and even his mouth.

It was a horrific clash and one that left the young fullback looking like he’d done a round in the boxing ring.

“It was a pretty unfortunate incident. I don’t think there was any intent there and it was just a clashing of heads. It looked pretty nasty but is not as bad as we initially feared.”

Bruised, bloodied, and shaken, Tait, who once again looked dangerous with ball in hand, left the field with his face in tatters, and will no doubt have a horrible headache in the morning.