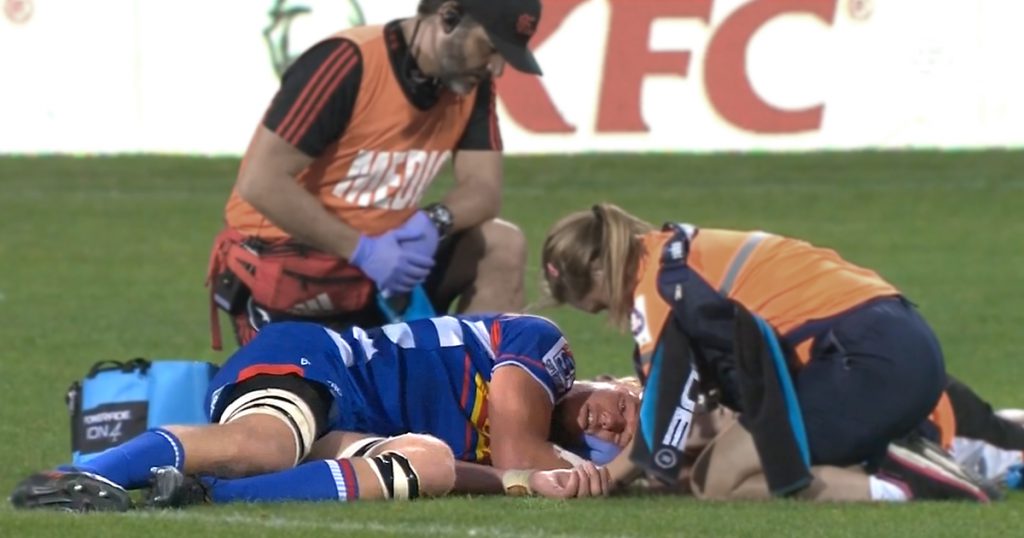 Crusaders number ten Richie Mo’unga was issued an off-field warning for the dangerous tackle that knocked out Stormers lock Pieter-Steph du Toit during their Super Rugby meeting in Christchurch on Saturday. This opens the tackling zero-tolerance debate again.

With the Stormers desperately needing points to get back into the contest, second rower Du Toit carried the ball well into contact, but lost possession when he was hit hard by Mo’unga. The ball spilt free and the Crusaders launched a counter-attack, which led to a try going into halftime.

The Stormers lock stayed on the turf, clearly out cold and needing attention, before he was stetchered off the field, with his night over.

The knockout blow wasn’t spotted at the time, and although it looked like a regulation tackle, Mo’unga has since been warned for contravening Law 9.13 – A player must not dangerously tackle an opponent early, late or dangerously.

Off Field Warnings are issued by the Citing Commissioner for foul play incidents that are very close to, but in their opinion do not quite meet the Red Card threshold for citings. Upon further review of the match footage, it was deemed that the Warning was appropriate.

Du Toit reportedly passed his concussion test but this week will go through concussion protocols to see if he will be cleared to play in the Stormers’ final tour match on Friday, against the Highlanders in Dunedin.

While Du Toit clearly crouched down while going into contact, the onus is on the tackler to make the adjustment, especially in the last year or so, with World Rugby directives.

So with Mo’unga’s shoulder making contact with Du Toit’s head, with force, it appears as though he was very lucky to get away with it and one wonders how the referee and TMO missed it.

That comes after the standard appeared to be set when Chiefs flanker Lachlan Boshier hit Ryan Crotty high recently, giving away a penalty try and being yellow carded.

On the flip side, it is becoming increasingly difficult for defenders, as low tackles are not always suitable in close quarters, or in the case of Boshier vs Crotty, at the tryline.