Rieko Ioane knocking on All Blacks door with impressive hat-trick 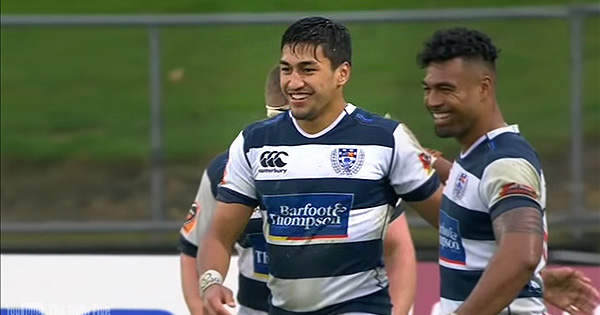 As the talent pool in New Zealand continues to frustrate the rugby world, young flyer Rieko Ioane is surely on the verge of a full international breakout. He was on top form again in week six of the Mitre 10 Cup, as he scored three magnificent tries against Bay of Plenty.

Still only 19 years old, Ioane has quickly become a force to be reckoned with. Any quick study of his work will yield an impressive and ever-growing résumé.

Having made his debut at age 17 with the New Zealand Sevens team, he’s also seen time with the Maori All Blacks and the Blues. He’s been impressive at every level and as expected, has already rated well enough to warrant All Black selection.

In August of this year, Ioane was called into the larger All Blacks Rugby Championship squad before their second Test against Australia.

All Blacks head coach Steve Hansen likes what he sees to this point as well: “He had a very good Super season and he’s someone we see having a big career. He’s 19 but he’s been to the Olympics, he’s been on the Sevens stage… But this environment will test him so we’ll just have to monitor that and see how he copes with it.”

New Zealand have thus far coped extremely well with the rather significant midfield losses, both through Test retirement and injury. In truth, the positions have been in some flux as both Ryan Crotty and Malakai Fekitoa have sought to cement a new pairing for the next generation.

Georgo Moala and Anton Lienert-Brown have also seen time in the midfield and don’t forget that when healthy, Sonny Bill Williams will be looking to get back a starting place. One could also assume that Charlie Ngatai will be putting a hand up when the time comes as well.

With all of these names, Rieko Ioane will certainly have his work cut out for him, but if he continues at this rate it’s not unreasonable to expect him to be donning the famous black jersey soon.

And as you can see in the tries below, he could easily be picked on the wing too.