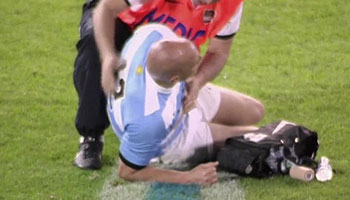 Felipe Contepomi played his final Test on Saturday, turning out against the Wallabies for his 87th cap, an Argentina record. Unfortunately things didn’t go exactly to plan in front of his home crowd as his team took a heavy defeat, and he was on the receiving end of a big shoulder.

Wallaby Rob Simmons was yellow carded after he took Contepomi out of the ball with a no-arms tackle. In Simmons’ defence he seemed to lean into the contact after commiting to his man, but the lack of an attempt to wrap, and following through with the shot, made it look pretty bad.

Contepomi was shaken, but continued on before receiving a warm reception when he was substituted later in the game. He will work in his father’s doctor’s practice upon retirement.

View highlights of the Pumas vs the Wallabies