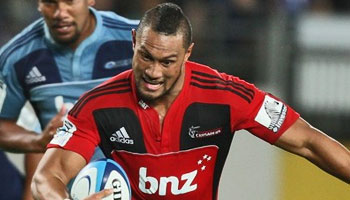 Here’s another look at that incredible handoff from powerhouse center Robbie Fruean during Super Rugby’s opening game between the Blues and the Crusaders at Eden Park yesterday. The Crusaders won the game 19-18.

New Blues scrumhalf Piri Weepu had the opportunity to snatch the win for the hosts with the final kick of the match, but his attempted dropgoal was charged down, giving the Crusaders the win.

Earlier in the game he had come on as a replacement and at one stage he got in the way of the human steamtrain that now sports a bit of a Mr T haircut, Robbie Fruean.

A little off balance and a tiny bit high, Weepu was sent into orbit by the young midfielder, a player who in many ways was unlucky to make the cut for the All Blacks last season.

You might have seen this live, or in the highlights that were posted after the game, but here it is again to add to a few of the other great handoffs included in the archive. It actually brings back memories of Sione Lauaki on both Richie McCaw in 2005, and Adi Jacobs in 2007.

You can see those, and other great clips of Freuan in action, in the related posts below this clip. Remember that if you’re registered, you can add this post to your favourites archive, as well as share it with your mates via Facebook and Twitter, using the Share and Tweet buttons below.

'Tactically, maybe we should have got the ball into his hands a bit more'

Sale director of rugby Alex Sanderson was frustrated at the Sharks’ failure to capitalise on a vintage performance by Manu Tuilagi in a 31-31 Gallagher Premiership draw with London Irish.

Sale surrendered a comfortable lead inspired by Manu Tuilagi as London Irish fought back to force a 31-31 draw in a pulsating Gallagher Premiership collision.