Robbie Fruean's quickfire try from the kickoff against Wellington 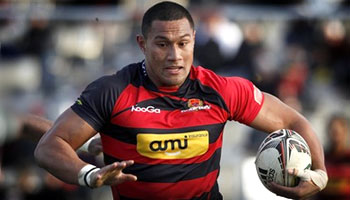 A while back we posted a video that featured some of the quickest tries ever scored from the kick off . Here’s another for the list, as Robbie Fruean scored after 20 seconds against Wellington in last week’s ITM Cup meeting at the Cake Tin.

While Wellington actually came back and won the game 37-28, Fruean scored one of the quickest ever tries in New Zealand’s national provincial championship, as he powered over with just twenty seconds on the clock.

Discarded by the All Blacks despite being such an incredible threat, the young giant has deceptive pace, as was seen here as he glided through the gap with the kind of ease you’d expect from a far more agile man. He brushed off a few tackles before ploughing over.

There seemed to be a few other interesting things that took place in this match, including some good tries and one in particular from a substitute hooker who had just been sick on the tryline, only to find the ball heading his way so he got up, caught it, and strolled over for the try.

Have a look at Fruean’s effort though, then check out the other quickest tries list that was posted on here last year. If you can think of any others that haven’t been mentioned, feel free to list them in the comments, or get in touch if you have a video or link.