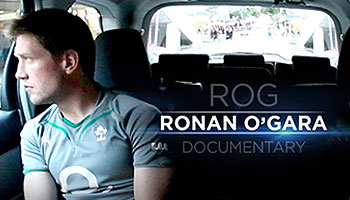 Tonight RTE ONE will air a fascinating documentary that covers the last four years of former Munster and Ireland star Ronan O’Gara’s career. Now coaching at Racing Metro alongside former adversary Jonathan Sexton, O’Gara spoke at length about their rivalry.

Brought to you by the same team who made ‘Reaching for Glory: Inside Irish Rugby ’07’ and ‘Ireland’s grand slam Journey 2009’ documentaries, this candid account of ROG’s final years playing professional rugby has been described as intense, unflinching and painfully honest.

“The film is a deeply personal chronicle of this dramatic period for one of Ireland’s most compelling sporting stars. From losing his place as Ireland’s rugby No 10 to his decision to retire and move to France as coach to Racing Métro 92, alongside former nemesis, Jonathan Sexton.“

The feature-length documentary gives us an all access look into the life of O’Gara, both public and private, giving fans insight into what really went on over the last four years of his playing career.

It airs in Ireland tonight, Thursday January 2nd on RTE ONE and RTE ONE HD at 9:30pm

EXTRA: View an excerpt from the docu that focusses on the rivalry between O’Gara and Sexton

O’Gara talking about when Sexton came into the Ireland team and how he felt being dropped from the starting fifteen for the 2009 clash against the Springboks in Dublin.