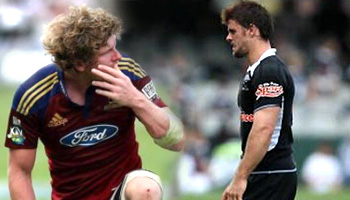 Sharks scrumhalf Rory Kockott has been handed a one week suspension after striking Highlanders flanker Adam Thomson during the home sides 23-15 win in the Super 14 at the Absa Stadium in Durban on Saturday.

Kockott lashed out at Thomson after he was flung to the ground without the ball, and after the whistle. A fiery character, Kockott lost his nerve and lashed out with a mean flat handed left hook.

Thomson was knocked to the ground, prompting assistant referee Craig Joubert to come on and advise referee Phillip Bosch that anything less than a red card is out of the question.

Kockott appeared at a disciplinary hearing today and pleaded guilty to the charge.
His lawyer had argued that a red card was sufficient punishment, but the SANZAR judicial officer felt that although Kockotts action was a reckless, open handed slap as opposed to a punch, it still deserved a one week suspension.

He will miss the Sharks crucial clash against the Waratahs, which will mean a major reshuffle to their backline.

In the same match, the Highlanders Danie Bowden was yellow carded for a high tackle, and has since received a one week suspension himself.