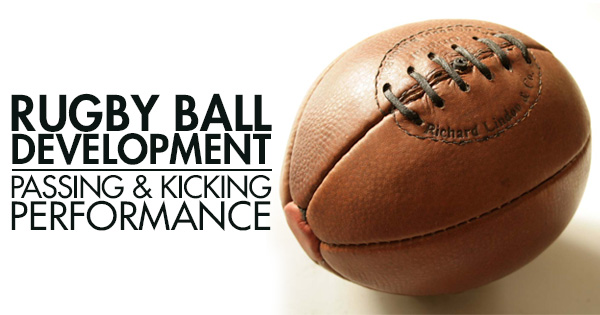 Rugby balls, they’re a funny old shape aren’t they? And it all started with pig bladders made by William Gilbert and Richard Lindon for Rugby school. Today Stephen Phillips, our resident Engineer, takes a look at their history and in which areas balls can continue to improve.

The first ever rugby balls were much rounder (see the above image from vintage rugby ball makers puntabout.co.uk) than the modern balls of today.

Their first development was to add leather panels to the balls to provide a bit of wear resistance, next rubber bladders were used and the balls started to take on a more familiar shape of the modern ones of today.

However, there were still different variations that each union preferred.

Australia and New Zealand preferred a narrower torpedo shape which produced less drag, leading to faster passing. The Springboks had their own 8 panel design for better grip and the 5 Nations had settled for a 4 panel design which is used today.

The shape and size of the ball continued to change, mostly based on player feedback. But it wasn’t until the 1980’s when the next major change occurred: Leather panels began to be replaced by synthetic ones.

The new materials allowed the balls to be made more cheaply, with better wear and water resistance. Grip pits were added to the surface of the ball to improve handling and aerodynamics, leading to the balls used today. 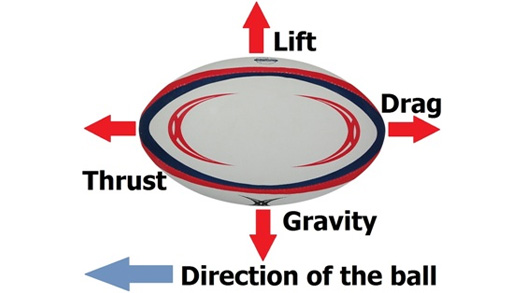 As the ball passes through the air it experiences few basic forces. Thrust, in the form of the player throwing the ball in a particular direction. Lift, which keeps the ball in the air. Gravity which pulls the ball towards the ground and Drag, which slows the balls movement through the air. Pretty much the same as any airplane you’ve ever flown on.

Unlike modern planes the shape of the ball can’t be changed for efficient flight through the air, as World Rugby laws dictate the shape and size of the ball for rugby.

So how do manufactures improve the passing performance of their balls? Well they can’t do anything about gravity, as the weight of the ball is set.

But they can do something about the other three forces.

Remember those grip pits mentioned earlier? They are made of a softer rubber material than the main panels, which allows for greater grip but just like F1 slick tires, they don’t last long. Hence the reason why balls are so slippy at the end of the season.

The pits also have another purpose; they help to improve the aerodynamic efficiency of the ball by increasing lift and reducing drag.

Manufacturers use CFD (Computational Fluid Dynamics) modelling to determine the best shape, size and location of each pit, to improve the aerodynamics of the ball. Next time you have two brands of match balls, take a closer look and you should see slightly different patterns.

While aerodynamics is very important for kicking it is also a lot more complex. Unlike a pass were the ball is usually spun in a straight line around the long axis with the narrow end pointing towards the direction of the receiver, a kicked ball often travels end over end and is dependent on where it was struck.

One important feature of a ball, when kicking, is how much kinetic energy it can store and how quickly it can release it. From the video below you can see how the ball deforms when kicked by the player. The bigger the dent the greater the energy transferred to the ball from the player’s kick.

The quicker the ball returns to its original shape, the quicker that energy is released, allowing the ball to travel further and faster. This ability is dependent on what materials are used for the bladder and outer layers.

While a lot of the initial design and testing is done with computer modelling and laboratories, the true test of performance is when the ball is used in a game. Companies often use professional players and teams to test the ball before releasing to the public.

As is explained above, there are only so many areas in which it can be improved so while the advances we’ve seen to date have been significant, going forward we probably won’t see things change too much.

And with that, what is your favorite rugby ball make?