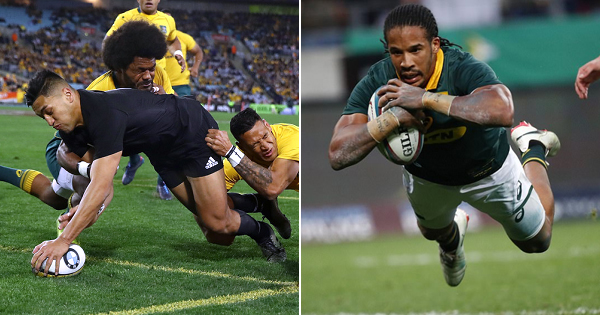 The 2017 Rugby Championship got off to a flying start as New Zealand staked a claim for a fifth title in six years after a thumping 54-34 victory over Australia in Sydney. South Africa also got off to a winning start with a morale-boosting 37-15 win against Argentina in Port Elizabeth.

The manner in which the All Blacks dominated the opening half against the Wallabies will surely make the other teams in the competition tremble, especially Australia who make the trip to Forsyth Bar Stadium in Dunedin this coming weekend for round two.

Sonny Bill Williams’ short-range try compounded the Aussie misery as the Kiwis led 40-6 at the break.

Australia fought back in the second half with four tries in the last half an hour but the game was already well-lost. Head coach Michael Cheika will no doubt take at least some positives ahead of round two.

This was an edgy affair for much of the encounter, with the boot of Elton Jantjies keeping the Springboks ahead after an excellent kick-and-chase try from Argentina scrum-half Martin Landajo.

Eventually Los Pumas faded and following on from their impressive 3-0 series win against France in June, South Africa needed no second opportunity to strike.

Two tries in a quarter of an hour – from Raymond Rhule and Siya Kolisi – maintained enough of an advantage either side of Emiliano Boffelli’s response.

Pieter-Steph du Toit’s late try put a finer gloss on a promising start to the campaign. The two sides meet again at the weekend, in Argentina.