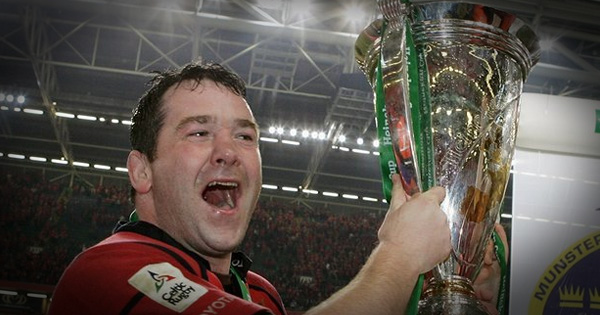 While the start of the European Champions Cup weekend was met with excitement, it ended in tragedy on Sunday as news broke of the shock passing of Munster legend, Anthony Foley. The former player and coach died suddenly in his Paris hotel room overnight.

As a mark of respect, the scheduled match between Racing 92 and Munster has been postponed.

It is with great sadness that we bid farewell to our coach, former captain, colleague and friend today, rest in peace Anthony Foley.

“Munster Rugby thank Racing 92, EPCR, broadcasters and partners, and the many fans who travelled to Paris for their understanding and support at this time.”

As news spread, Munster fans gathered at the gates of Stade Yves-du-Manoir and sang ‘The Fields of Athenry’, as well as opened an impromptu book of condolences.

Tributes were paid by former team mates and rivals from all corners of the rugby world and from the President of the Irish Republic.

A minute’s silence was observed in memory of one of the greatest players in the history of the European Cup before the kick-off of the final game of round one in the Champions Cup, between Exeter Chiefs and Clermont Auvergne at Sandy Park.

Former teammate Ronan O’Gara, now a coach at Racing 92, posted a tribute to his friend on Sunday night, saying on twitter that he was an ‘incredible man’.

Alone on the couch with Jess.Heartbroken.We have lost an incredible man. Too sad to tweet further.. sleep well Axel. We love you..xxx

Some highlights of Foley in action over the years, with RTE’s Joe Stack reflecting on his career

Scrumhalf Peter Stringer said that Foley was his ‘protector’ on the field.

Feeling numb and alone with only thoughts of this remarkable man.My protector on the field,I will miss you forever Axel.
RIP

Foley is survived by his wife Olive and their two children. Ireland’s Department of Foreign Affairs have confirmed that they are providing consular assistance through Ireland’s Embassy in Paris.