Rugby HQ Plays of the Month for March 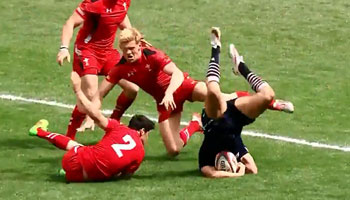 That’s right rugby fans, it’s Plays of the Month time from the team at Fox Sports’ Rugby HQ, and they’ve put together another top video with their usual combination of great tries, big hits and wacky play, plus some other interesting moments from the world of rugby.

We’re midway through April but it’s never too late to look back the previous month, especially with some of what has gone on in both Super Rugby and the Sevens World Series.

Look out for a starring role from little Cheslin Kolbe, as he set up a beautiful try, but suffered a few big knocks as he bravely put his body on the line. Also, there’s Nathan Charles’ spectacular falcon, and one of the most painful charge downs you’re ever likely to see.

For more best bits from the wonderful world of rugby head to our Plays of the Week archives.